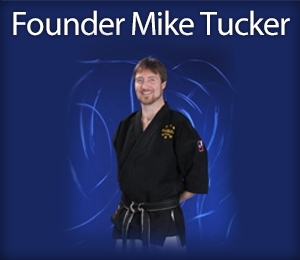 Mike Tucker started training in 1980 under Al Garza. Mr. Tucker was recognized 5 consecutive years as one of the top ten in Texas and as Rookie of the Year and Top Black Belt Fighter in 1985.
From 1985 to 1990, Mr. Tucker ran schools for Mr. Garza and helped create a unique Martial Arts and business system. In 1991, Mr. Tucker opened what is now USA Karate.
He was a 7th degree master level black belt under Rick Moneymaker and Tom Muncy, 8th degree Grandmaster in Okinawan kempo and tuite-jitsu.  He also held a 4th degree black belt in Ryukyu Kempo under 9th degree Grandmaster George Dillman.  Mr. Tucker earned a 3rd degree black belt in tae kwon do under Al Garza and a 1st degree black belt in judo and jiu-jitsu under Zdenek Matl.  In 1999, Mr. Tucker was inducted into the World Martial Arts Hall of Fame as the Master Instructor of the Year. Also in that year,  Mr. Tucker was certified as a 5th Degree Black Belt in Torite-jitsu by the World and British Kempo Arts Federation, signed by 11 Masters and Grandmasters.
Mr. Tucker passed away in July of 2016.  His instructors and staff continue his legacy of the martial arts.